Emil lived behind the iron curtain in Czechoslovakia. I grew up behind the iron curtain in Poland. Emil is known for for his contorted facial expression and wide swinging stride. I have been known to look tortured while on the run. Emil was named The Greatest Runner of All Time (PDF) by Runner’s World Magazine. I sometimes read Runner’s World Magazine.

While I grasp at having things in common with Emil, I fall far short with regards to the dedication, accomplishment and spirit embodied by Emil Zátopek. He was simply awesome and I dare you to read this post and not run out and buy a picture of Zátopek and display it prominently in your home. Good luck.

Emil became a runner quite late in life by today’s standard. He was 18 and working in a shoe factory when the factory’s sports coach ordered him to partake in a race. He tried to get out of running, complaining of not feeling well and not being in good enough shape to compete. The coach was not so easily detered, he sent Emil to the doctor who gave him a stamp of approval and off he went to the races. He finished second out of the pool of 100. More importantly a seed was planted. He was “in” … “ALL IN!”

Once in, he took the rational attitude towards the sport: “Running is easily understandable: you must be fast enough and you must have enough endurance,” he said. “So you run fast for speed and repeat it many times for endurance.” And that is precisely what his routine looked like. Except  he took it to new heights. And even in the hardcore old-timer’s era of training – where there were plenty of stories of athletes running until they passed out, going to sleep in a ditch, waking up and continuing to run – his regiment was fearsome. He took speed work to another level. For him 40×400 were routine, he would escalate that to 50×400, 60×400 and in extreme times 100x400s (that’s 25 miles of speed work in a day). He ran in heavy work boots in the snow. He even ran tempo runs with his wife (an olympic gold medalist in the javelin) on his back. Here are a few words of wisdom from Emil: 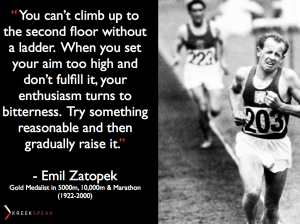 He did preach gradual escalation. 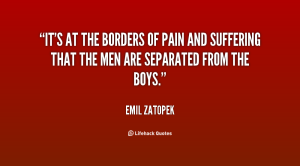 Now, let’s get to the greatest feat of Emil’s performance. It was the 1952 Helsinki Olympics where he became, and still is, the only runner to win gold in the 5,000 m, 10,000 m and while running it for the first time the Marathon. All of these wins were accomplished in spectacular ways: the 10k was total domination, the 5 k was a dramatic sprint to the finish with Emil coming from behind, and the marathon literally knocked the top contenders off the course.

Since Emil had never run a marathon before he kept his strategy simple: follow the leader. So he introduced himself to the world record holder, Jim Peters, at the start line and ran alongside him for a while. At the one hour mark, Emil asked Jim if the pace was fast enough. Jim sarcastically responded that it was way too slow. Although Emil spoke six languages, he apparently did not understand sarcasm fluently, accepted Jim’s response as fact, and started to speed up. Shortly thereafter, Jim saw Emil disappear over the horizon and Jim was forced to withdraw due to fatigue. 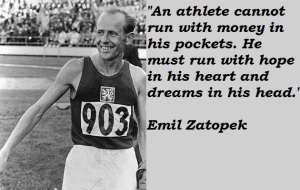 So he was fearsome at training, and a legendary athlete, but those who were lucky enough to meet him would all tell you that his athletic prowess paled in comparison to his enthusiasm, friendliness, and love of life. His humble home in Prague served as a hostel of sorts for athletes from around the world. The Australian Ron Clarke, who was a great runner with terrible luck, was one of those visitors. Ron admired Emil greatly and wanted to join his idol in the record books but repeatedly fell short of reaching his dream. After a two day visit, Emil handed Ron a package – a small gift – as he was leaving. On the plane home, Ron opened the package to discover that Emil had gifted him his 1952 10,000 m gold medal engraved with the day’s date and Ron’s name.

After all, as Emil said:

“Great is the victory, but the friendship of all is greater”

Here is a good video talk about Emil from Mike Sandrock who wrote “Running Legend” about Emil.

Here is a synopsis of the 1952 marathon.